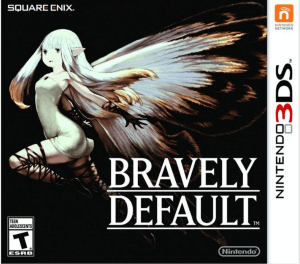 Also known as “Bravely Default – For the Sequel” in Japan. The story revolves around the group of Agnès Oblige and his friends on a journey to awaken dark crystals to bring balance to the planet. With the gameplay of classic RPG games, you will control your character from the third perspective, with the camera tracking the actions of the character in the upper screen, while the secondary screen below will help display basic parameters, maps, and optional items allow you to fight continuously without interrupting the main screen. During your journey, you will travel through different towns and interact with the NPCs there, where you can buy more weapons and combat support items in the shops. The game has a constantly changing cycle day and night, the inns will play a role to help the character to rest overnight and recover the stats. Fighting in the Bravely Default is especially focused on blocking, when attacked by the enemy you will have to choose the exact time to prevent damage from enemies, in addition to each successful block hit you will be added one Brave Point. Each skill will need a certain number of Brave Points, you can also use Brave Points to create Brave attacks to give the character an extra turn. Conversely, if the character uses skills or Brave when there are not enough Brave Points, they will be negative, so you are likely to lose your turn. Another very powerful attack is a “special attack”, but to perform it also requires certain conditions such as Brave 3 times or more or Heal at least 5 times.