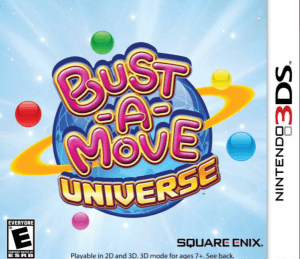 
Bust-A-Move Universe is a puzzle video game developed by Taito and Arika, first released by Square Enix on February 26, 2011. Join the game, the mission is shooting the balls in the position of the balls of the same colour, when you connect three balls of the same colour become they will explode and fall down. But the ball will not stop pushing, if any ball touches the bar at the bottom of the screen, the game will end. During the game, you will also encounter many other support items including colourful balls that will be able to connect to any ball or items that help stop the time allowing you to calmly handle the difficult situations, etc. The game also offers many different game modes including boss battles, 100-second, 300-second, and Challenge Mode.