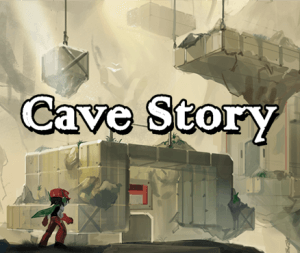 Cave Story is a re-release of the original Cave Story and meant to replace the 2010 DSi version. As technical limitations prevented it from being provided as a free update, it was released as a new game. This version does not incorporate the re-drawn look of the 2010 Wii version or the 2011 PC version Cave Story+, nor does it carry over the very different 3D makeover from the 2011 3DS game Cave Story 3D. The game was reworked to fit the higher 5:3 widescreen screen size and has the stereoscopic 3D effect. This makes it easier to distinguish elements in busy environments, but optionally it can be scaled back to the original 4:3 resolution. Contentwise there are a few small tweaks. The in-game map is no longer visible at the bottom of the screen all the time, encouraging the player not to rely on it too much. It is also possible to customize the controls, flipping jump and shoot buttons for instance. The game incorporates the additional content of the WiiWare and + version with the modes Boss Rush, Curly Story, and Sanctuary Time Attack (WiiWare and Cave Story+ versions) and the new unlockable Wind Fortress area with the new enemies and bosses, and the Nemesis Challenge (Cave Story+). It includes the reindeer and vampire sprite swaps from the WiiWare version, but not the holiday themed content from Cave Story+. It also contains the jukebox option from the DSi version.