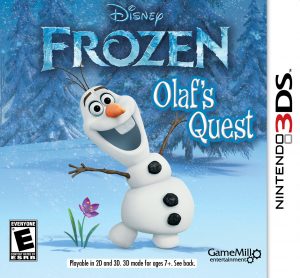 
Based on the 2013 Walt Disney animated classic film 'Frozen', this game allows players to control Olaf the snowman on a quest around the fictional kingdom of Arendelle to create a lovely bouquet of flowers for Anna (who built him along with her sister Elsa at childhood). The gameplay takes a simplistic platform approach where players must move Olaf left and right using the control pad, the A button to jump and the B button to throw Olaf's head to get hard-to-reach items scattered throughout the levels. Olaf can also double jump, hover (hold A while airborne) and can ground slam (press Down while in the air) to break ice blocks along the way. Collectible items consist of snowflakes and flowers (important to Olaf's objective). The game also includes a 'Dress-Up' menu where players can dress Olaf in several accessories (which require 6 stars to unlock each). Stars for these accessories can be collected by getting all snowflakes, flowers and completing the levels for each.