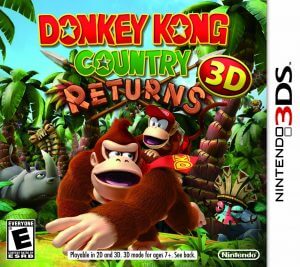 
The story begins when a volcano erupts on the island of Kong’s family, which also inadvertently wakes up evil creatures called Tikis. A group of Tikis claiming to be Tiki Tak Tribe appeared and hypnotized the other animals living there, their purpose is to steal the bananas of the Kong family. Donkey Kong and Diddy Kong together search for the Tiki Tak Tribe to defeat them and retrieve the bananas. Join the game you will control Donkey and Diddy will be on the shoulder of Donkey and act as a jetpack so you can fly. Like the other games, you will have to skillfully overcome complex terrain, pitfalls and deep holes that can appear anywhere. During the game, you also face other dangerous animals, attack by jumping on them. If you have good eyes, you will be able to spot hidden objects and caves in the environment. Try to collect as many bananas as possible because they will act as currency in the game that allows you to buy more interesting items. The game also supports a two-player mode, and the second player will control Diddy Kong, Diddy players can also jump on Donkey’s back to form a single character. Donkey players will control movement and Diddy players will activate jetpack. If one player dies, the other player can revive by finding and shooting “DK Barrel”.

Story of Seasons: Trio of Towns