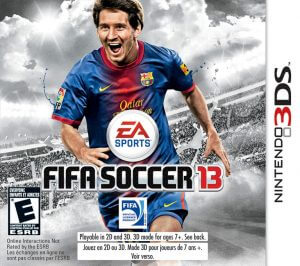 FIFA 13 (also known as FIFA Soccer 13 in North America) is the 2012 edition of Electronic Arts' association football FIFA video game series and was developed by EA Canada. A demo of the game was released on 11 September 2012; with the following teams being playable: Borussia Dortmund, Manchester City, Juventus, A.C. Milan, Arsenal and was downloaded a record 1.99 million times within three days. The game was released in late September 2012 in most regions with the Japanese release being in October. FIFA 13 included new features to the FIFA franchise such as the First Touch Control and new celebrations were also added. This game was released on the platforms of : Nintendo 3DS Nintendo Wii Nintendo Wii U PlayStation 2 PlayStation 3 PlayStation Portable PlayStation Vita Windows Xbox 360 (The release date varies depending on where it was launched and its origin, that is, if it was in North America, Europe, Africa, Oceania, etc.)

I Love My Dogs