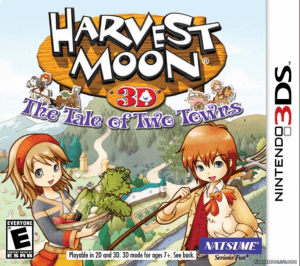 Many years ago, the neighboring towns of Bluebell and Konohana were once very friendly, people between the two towns were connected through a tunnel. But then one day between the two mayors there was an argument about which food was better in the town. The Harvest goddess was depressed and collapsed the tunnel to stop the controversy but also caused the two towns to lose contact. Players who walk through a mountain between two towns accidentally fall off a cliff between the two towns and lose their memory. When awake, the two mayors multiply the players themselves who live in their towns. At the beginning of the game, you will customize your character including gender, outfit, etc. Then you will be able to choose the town where you will live. Bluebell is more interested in breeding and Konohana specializes in farming. In addition to looking after your farm, you can receive quests posted in the bulletin board or from the townspeople. You can also foster your relationship with people living in the two towns, even dating and marrying the right people.