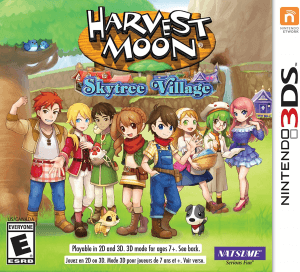 Harvest Moon: Skytree Village is the third independent Harvest Moon developed by Natsume since the company began developing the series separately from the original Bokujou Monogatari(????) series developed in Japan (see here for explanation), with the first installment being The Lost Valley for 3DS and the second being Seeds of Memories for mobile/Wii U. It has many returning features from the previous Harvest Moon: The Lost Valley, such as the ability to sculpt and shape the terrain on farmland, but unlike The Lost Valley, there is a fully fledged town that is usually available in most Harvest Moon/Story of Seasons games. To veterans of the series, all the familiar features are there as well; the ability to woo and marry from a myriad of potential marriage candidates, exploring the wilderness, and of course, the farming itself! The “Save the Harvest Goddess/Restore the Land” theme that is featured in many of the previous entries to the series returns as well, so farmers better grab their hoes and get back down to earth! Features Build up your own farm from scratch Sculpt the land to truly make your farm your own Grow crops and raise animals Fall in love, and get married with 3 bachelors/bachelorettes each to choose from Save the Harvest Goddess and restore the land, one crop at a time And much, much more!