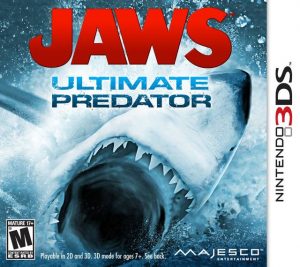 
JAWS: Ultimate Predator on the Nintendo 3DS system puts you in control of the hulking terror of the seas like never before, letting you experience the action through the eyes of the beast in startling 3D. Developed by n-Space and produced by Microprose, the Nintendo 3DS version of JAWS: Ultimate Predator lets you defeat an army of shark hunters and rule the ocean by unleashing deadly attack combinations such as Feeding Frenzy and Corkscrew Shred while using the Touch Screen to bite, ram and dodge enemies.

Green Lantern: Rise of the Manhunters