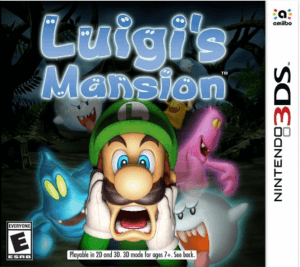 The story begins when Luigi receives a reward on the show that he never participates in, but out of curiosity, he tells Mario and the two of them to meet up in front of the castle. Tracing the map and finding the place but not seeing the figure of Mario, Luigi felt something strange inside. When he entered the panicked when being attacked by a ghost then luckily saved by a scientist named Elvin Gadd when he tried to suck the ghost out with a vacuum cleaner. E. Gadd also said that he saw Mario enter the castle. Luigi now uses E. Gadd’s vacuum cleaner as a weapon to go deep inside looking for Mario and also to uncover the mysteries. As Luigi, your task is to hunt down the ghosts in the room and search for the key to go to the next room. Your weapon is a flashlight, a special vacuum cleaner and a Game Boy Horror provided by E. Gadd, to catch the ghosts, you must first use the flashlight to shine on them and use the device to lock the ghosts in. In addition, there are some ghosts that you need to use other ways such as collecting medallions or performing conditions to be able to catch them as usual. The Game Boy Horror acts as a map to help display the location and determine the key to open any room. The boss monsters will also appear, unlike other normal ghosts, they can escape to different rooms and you have to chase if you want to capture them.