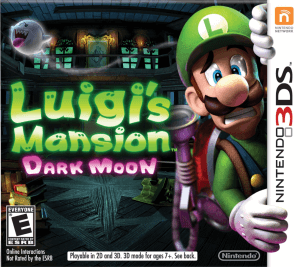 King Boo has returned and continues to plot his plans to invade the world once more, breaking the Dark Moon and causing the ghosts of the Evershade Valley to rebel. Professor E. Gadd has to rely on Luigi’s help once more to stop the ghosts from invading the rest of the world. Although very scared Luigi had to accept the task of finding the pieces of the Dark Moon for Professor to restore it. As Luigi, you will have to go to different castles and fight scary ghosts. This time, Professor E. Gadd equips you with weapons including a flashlight, Poltergust 5000 (upgraded version of Poltergust 3000), Dual Scream (like a DS) and Dark-Light (glasses that help detect hidden items). When confronted with ghosts you have to use the Strobulb included in the flashlight to stun the ghosts that make their weakness appear. Now you will use a vacuum cleaner to make them weak, when weak enough they will be sucked into the device, you can lock up to three ghosts at once. In addition, there are some ghosts equipped with protective gear and you can not catch them normally but have to find ways to deceive them. In the process of playing you also have to solve some riddles, this time the flashlight and the vacuum cleaner will help you in some cases. In addition to the normal game mode, the game also allows you to cooperate with up to four other players. In the castle, each person will control a Luigi of different colors, when completed the players will be moved to the next stage.