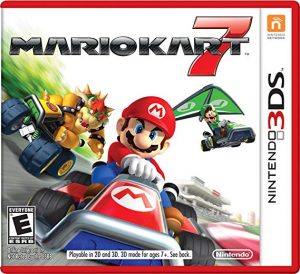 Mario Kart 7 is a game in the famous Mario Kart series, so far it has become the best-selling game on the 3DS system. Keeping the traditional gameplay and familiar characters, participating in the game you will control your favorite characters to participate in fun races. For a single-player, there are four different modes including Grand Prix, Time Trial, Balloon Battle, and Coin Runners, each with different rules and play methods. In Grand Prix, you will be able to participate in races with seven other AI-controlled characters, the reward will be trophies depending on your position on the rankings. Time Trial puts you alone in a racetrack, your goal is to finish as fast as possible in a given time, you can also use three mushrooms in this mode. The two modes that can be played online are Balloon Battle and Coin Runners, where you will compete with players around the world, your task is to collect items to attack opponents, each attack. You get a score, finishing two minutes, the person with the highest score will be the winner. There are many different types of cars to choose from, especially with the first-ever vehicle editing feature that allows you to create your own vehicle. This version also added 16 new tracks, bringing the total to 32, including 16 tracks from the old versions.