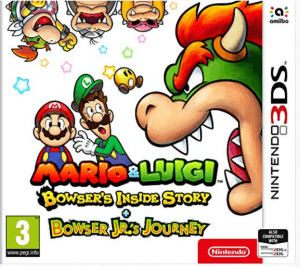 Also known as Mario & Luigi RPG3 DX, this game is a remake of Mario & Luigi: Bowser’s Inside Story released in 2009 for Nintendo DS. The plot has not changed much from the old version. The story tells the journey of two brothers Mario and Luigi against a crazy scientist named Fawful with a plot to take over the world. He purposely spreads the “Blorb mushroom” that makes people eat like a ball, this disease is called “The Blorbs”. Fawful also tricked Bowser into eating a mushroom that caused him to inhale the surroundings into his body. Join the game you can choose one of your favorite familiar characters then step into the exciting world. During the game, you will be in Bowser’s body, while he constantly sucks other creatures inside so you have to fight them. Some levels you can control Bowser with two skills of punching and breathing fire. There are many different funny mini-games. When winning you will make the parts of Bowser body become stronger. Alternatively, in this remake, you can use Bowser Jr. to play like a normal character. Here you will control an army to fight the opposing army, there are many different types of soldiers and each type has its own strengths, your task is to win as many battles as possible.