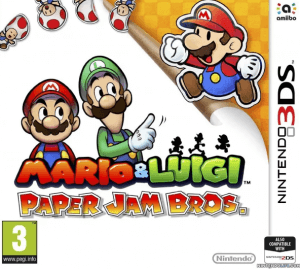 The story begins when Luigi is trying to repair the library in Princess Peach’s castle, he accidentally stumbles upon a special book that makes the characters in the paper world appear in the Mushroom Kingdom. Bowser also met paper character just like himself, Paper Bowser, in order to carry out their evil plan, they kidnapped Princess Peach and Paper Peach. Mario and Luigi must work together with their partners to stop the Bowser plot as well as make things return to normal. Join the game you will control familiar characters to overcome challenges and fight countless enemies. Mario and Luigi still possess familiar skills similar to other parts in the series. Paper characters have special abilities, such as traversing narrow terrain or turning into paper planes to support others. Characters can also combine to create a special attack called “Trio Attacks”.