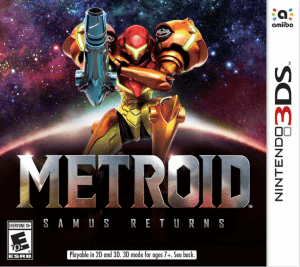 In the year 20×30 in the space calendar, a group of Space Pirates attacked a researcher’s ship and robbed a mysterious creature living on the planet SR388 called Metroid. Their purpose is to use Metroid as a weapon to invade the entire galaxy. Now the Galactic Federation has sent a mercenary named Samus Aran to break into the planet Zebes, a base of bandits to stop their plans. As Samus, you will have to fight alone with a large army of enemies. Your weapon is an energy gun that can create a laser when aiming at them. In this part, Samus’s aiming ability is 360 degrees compared to the previous version, which is only a few certain angles, in addition to Samus can also create a powerful melee attack on the enemy. The old skills in Metroid II including Grapple Beam, Power Bomb, and Super Missiles also appear in this part. A new skill called Aeion, which allows the character to scan the surroundings to help detect roads and Hidden items, but to use will need a certain amount of energy. This time, the game also supports the transfer station feature so you can move quickly through areas.

Juan
I've downloaded and played the Europe, Japan and USA movile version, and there is some things which i'd like to report; The first one is: there is a bisual bug which makes invisibles the breckable blocks, they are very unconfortable cause you dont know where they are. The second one is: after to fight against the Arachnus, the hidden way is locked by a block, and that block is located where it mustn't (as 3 block under from it's original position, between those 2 aspirators which steal the bombs) making imposible go out there. Third one is: When i go to fight against one metroid ubicated in a hot zone (after to find a teleport station), there is a block ubicated in the border of a wall, and i can't destroy it, i can't pass from there I'd like to know if you can repair it
Reply - April 16, 2020