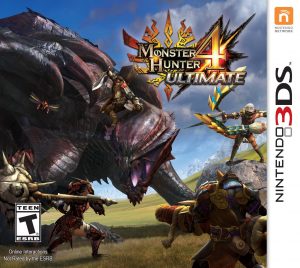 Also known as Monster Hunter 4G, this is an enhanced version of Monster Hunter 4. The plot of the game has not changed from the original. At the beginning of the game, the player will be an unofficial and inexperienced hunter, while on a journey to the town of Val Habar by sand ship to register to join the hunter’s guild. When the player’s ship is under attacked unexpected surprise by a giant monster named Dah’ren Mohran. The monster quickly prevailed but fortunately, the top hunters appeared and overpowered the monster. He then introduced himself and offered to invite the player to the party when he saw the player’s skills. The adventure also begins here.
Join the game you will become a true hunter and fight against monsters that are annoying people in this world. There are hundreds of different missions with countless large and small monsters of all kinds that need you to destroy. When destroying monsters you can also use parts of their bodies to create different types of items and potions to help support the battle later. Weapons in the game are also very diverse with many unique shapes and use. The world in the game is extremely vast, where you can easily encounter other NPCs of all industries and sometimes you will need their help.