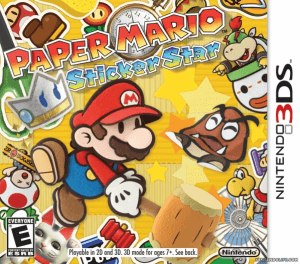 
The story begins on the night of the Sticker Festival featuring Mario, Peach, and Toads. Suddenly Bowser appears and destroys the festival, he accidentally touches the Sticker Comet causing it to fly into the sky and shatter into pieces, one of which flies straight into Bowser and gives him power. Though Mario tried to stop, he was quickly defeated by Bowser’s new power, after which he abducted the princess and left a mess. Play as Mario, your mission is to rescue the princess and find the fragments of Sticker Comet. During the game, you will have to overcome the pitfalls, look for stickers to solve some puzzles and fight the enemies. Battles take place with the turn-based system, action choices appear as stickers. In addition, Kersti will follow and assist you in a number of situations. The game takes the theme of paper, graphics and effects also designed extremely interesting to bring a whole new experience.

I Love My Little Boy

Mario and Donkey Kong: Minis on the Move