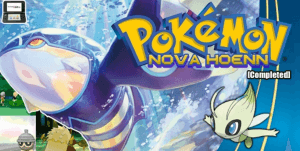 Pokemon Nova Hoenn (Pokemon Omega Ruby and Alpha Sapphire Hack) is a remake of the original Pokemon Omega Ruby and Alpha Sapphire game created by a ROM hacker nicknamed Punxhi05. The story begins when a Pokemon named Celebi walks through an ancient forest and comes across a strange stone. At this moment the dark part of the heart completely controlled that Pokemon, causing everything to be destroyed behind where it passed. Join the game, you will become a young trainer in the training journey to become a new champion with the purpose of freeing Celebi.

– THINGS TO KEEP IN MIND
– All wild Pokémon are randomized, and those of the trainers as well (except gym leaders, high command, villain team leader, league champion, etc.)
– All Pokémon that originally evolved by exchange now have some additional method (except Porygon and Porygon2), such as stone, level up with an equipped item, level of friendship, and others like espeon and Umbreon.
– DO NOT UPGRADE THE GAME (hack-ROM). If it is updated, the texts are restored.
– Some models are not the same in the overworld as in battle (for example, kyogre is in the overworld, but in battle appears celebi), and the ultraviolet models/textures are not changed.
– Some animations are blurred or unavailable

Around the World with Hello Kitty and Friends

Murder on the Titanic