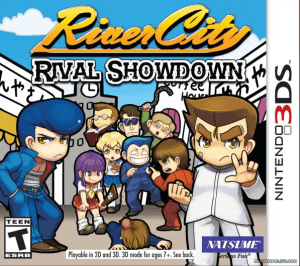 The story revolves around the protagonist Kunio, a top criminal who is also a prominent student in sports and has brought many achievements to his school. With a quick but courageous personality, Kunio became a symbol for the student council. But recently Kunio has often encountered people who purposely ambushed him, and he gradually realized that an organization was taking over high schools. With simple but fun graphics, along with side-scrolling gameplay, playing Kunio here you will encounter countless enemies and have to fight them. In addition to basic attacks, you can use objects in the environment to throw at enemies. The city is divided into several small locations shown on the bottom screen, the missions will ask you to go to certain locations and fight the enemies there. Completing quests will earn you some money, using them to buy additional equipment and items needed.