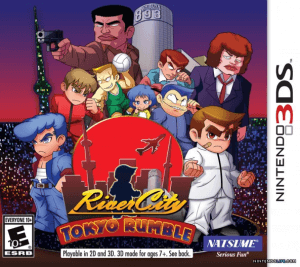 The story focuses on the protagonist Kunio, a street criminal but also an elite student at Nekketsu High School. Kunio one day finds his friend Hiroshi beaten by students of the Hanazono school nearby. Finding their leader Riki, who is also Kunio’s friend, they learn about and know the culprit is a subordinate of Riki. The boy claims to have joined an organization called “Tokyo Lion Alliance” with the conspiracy to capture all the underworld of this city. As Kunio, your mission is to find and defeat the leaders of the Tokyo Lion Alliance to stop their conspiracy. When fighting, in addition to basic attacks such as punching and kicking, you can also use items that appear in the environment to attack enemies, even lift them and throw them away. The proceeds after each mission will be used to buy more items and equipment to help support the upcoming battles. There are tasks that require you to go to many places in the city, this time you can use the train to move quickly.