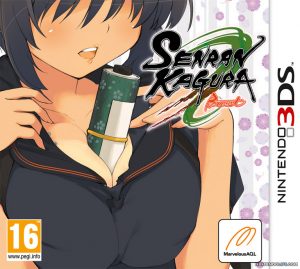 Seduction and violence seem to never relate to each other, so the girls in Senran Kagura Burst will change your mind. The game consists of two different interesting storylines and I will let you learn about them yourself. With the side-scrolling “beat-’em-up” action, you will control beautiful female ninjas fighting with other opponents. With each character using a different kind of weapon and fighting style, they also own many different types of costumes such as pretty girls, bikini, ninja, etc. There are many enemies that will appear and you will have to face them all at once. In battles, in addition to basic attacks, you can combine combos to defeat enemies, each girl also has special attacks to help deal great damage. When a character is attacked, their costume will tear, causing the hot body to gradually surface, you can also change the costume for the character between battles and you will witness the whole process. In addition to fighting, you can also better understand the characters’ personalities through conversations between them. With beautiful 3D graphics, the movements of the girls become extremely vivid, bringing exciting and hot battles.