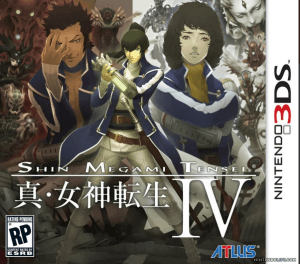 The story revolves around the protagonist Flynn, a Samurai who was reborn as a savior of Tokyo many years ago. One day Flynn and his friend Issachar came to Mikado Castle to take the test before being recognized as a true Samurai. Here they face the castle’s guardians, Flynn succeeds but Issachar fails. As Flynn was about to start the next test with the other candidates, a strange phenomenon occurred that cursed books spread throughout the region and turned anyone who read them into demons including Issachar. Play as Flynn, you and the other candidates will investigate and destroy the people behind this event. When exploring, you will control your character from the third perspective, while the battle will take place as the first perspective. The enemies will appear scattered in the environment, you can attack them first to create an advantage. In turn-based battles, you will control your character and the three demons. Focus on the physical system and elemental countermeasures, when you make a critical hit, your team will receive one more turn, otherwise if the blocking attack you will lose one turn.