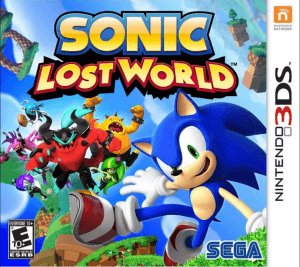 The story begins when Sonic and Tails are chasing Doctor Eggman to rescue his friends. They accidentally fall into a world in the sky called Lost Hex, where the Deadly Six live. Eggman used the magical conch to control the Deadly Six, Sonic immediately destroyed the magical conch and made the Deadly Six free. But then Sonic quickly regrets when the Deadly Six try to drain the energy of the underground world. Reluctantly Sonic must cooperate with Eggman to prevent their plot. As Sonic, your mission is to rescue the kidnapped friends and sabotage the plot of the Deadly Six. You will have to move through complex terrain and try to collect gold rings, Sonic also has the ability to curl up to speed and attack the enemy. In addition to the old items, Drill, Laser and Rocket, this section also adds and new items including Eagle (which brings flying ability), Asteroid (turning objects on the way into atoms), Rhythm (for Sonic moves along an existing path) and Super Sonic (makes the character strong).