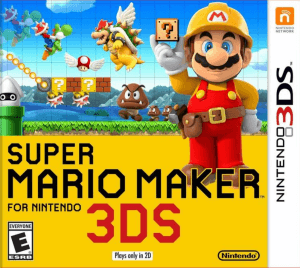 Initially, Super Mario Maker was released by Nintendo for its Wii U console in 2015, but then a customized version for 3DS was released with the full functionality of its predecessor. Based on the famous Super Mario game, Super Mario Maker allows you to create your own game screen and can be shared with other players around the world to try it out. If you still have doubts about your abilities, do not worry because the game will have basic and advanced instructions from Mary O. and Yamamura. Familiar elements such as pipes with hidden traps or enemies appearing suddenly, etc., you can arrange them as your will or you can even make enemies bigger by giving them super mushrooms, giving them wings so they can fly and lots of other interesting things. If you are bored with the design work or feel that it is not right for you, you can also participate in 100 pre-installed levels, with 19 different worlds, your familiar task is to rescue the Princess Peach. The game screen also becomes simpler when you will be starting with 10 networks but you can increase it to 100 if you like. When you use up your life you no longer have to play again from the beginning but just play it again. Some special levels require you to collect all the coins in a game screen to get the medals.