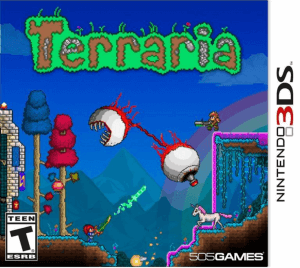 Terraria is an action-adventure sandbox game video game. Participating in the game you will be an adventure in a fairy world where you can do anything you want without having to perform any task linearly. The game has graphics reminiscent of side-scrolling 16bit games, the gameplay revolves around mining, manufacturing, and fighting, starting the game you will be equipped with three tools including a hoe to dig, an ax to chop and a sword to fight. Use the right tools to exploit the resources, then you can create many different items, even you can build your own house and decorate it. Initially, you will have a certain amount of HP and MP but they can increase as items are found. Explore the cave to find a variety of ores and treasure chests containing many valuable items, but here you also encounter many dangerous creatures. In addition to the starter equipped sword, you can create many different weapons such as arrows, guns, etc. or you can learn other interesting spells to fight the enemy.