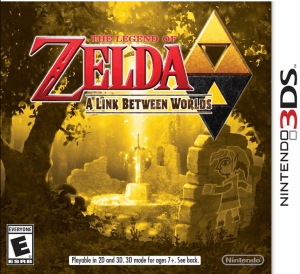 The Legend of Zelda: A Link Between Worlds

Note: this game is not a direct sequel to The Legend of Zelda: A Link to the Past nor a remake, in simple words, it happens in a world parallel to A Link to the Past.
The story begins when Link is fighting the monsters, but he wakes up and realizes it’s just a dream and he’s late to his smithy. When he arrived at work, he met a knight and saw that he received the shield and left, then the blacksmith boss asked Link to chase after the knight to give him the forgotten sword. From there the real war has just begun. Join the game you will control the Link with a top-down perspective, here you will start the adventure and fight with countless other enemies. The top screen will show you energy bars, hearts, and actions, while the bottom screen will display a map telling the player the current location along with other equipment and items. Your main weapons are swords and shields, as well as other weapons that support ranged attacks including bows, bombs and fire rods. You can also rent other equipment in Ravio’s store for a low price, but that means if you die, you will lose that item. Another really cool new mechanism is that your character can walk into walls like a painting on it, which will help you move to areas that normally can’t be reached. In return, your energy bar will deplete quickly.