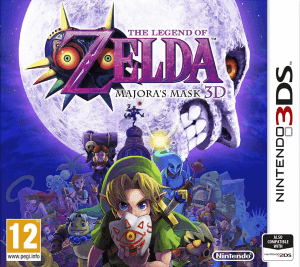 The Legend of Zelda: Majora’s Mask 3D is an action-adventure video game and is a remake of The Legend of Zelda: Majora’s Mask released in 2000 for Nintendo 64. The game sets after a few months from the events in The Legend of Zelda: Ocarina of Time. Link is now on a journey to find his lost friend Navi, to a certain forest Link is a masked Kid Kid robbing Ocarina. Chasing after thief Link discovered he was in a world parallel to Termina, he also saw the scene that took place three days later, the world would collide with the moon and destroy it all. Controlling Link under the third view, your task is to find and wake up the Four Giants who are sleeping in different places in Termina. A companion, Tatl, a glowing butterfly that can help you in a number of situations. Your weapon is a sword, bow and a shield. In addition, this game focuses on masks, they can turn characters into different shapes with special abilities such as scrolling to increase movement speed, sprouting ways, etc. They can also repeat a three-day cycle giving players more time to explore. Overall this is a pretty perfect remake when the game’s graphics become more eye-catching, the movements of the characters are also smoother. Even Nintendo has adjusted the clock to a three-day performance period slower makes it easier for players to complete quests.