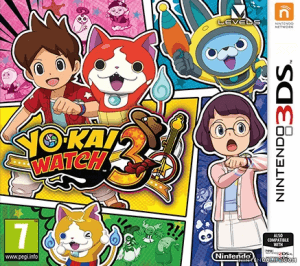 The story begins when the protagonist Nate moves in Peanutsburg in BBQ country. Here Nate and his friends make friends with Buck, who is able to see ghosts named Yo-Kai thanks to a special stone worn around his neck, from which interesting stories begin. Join the game you will control two characters, Nate and Hailey, here you will use a device to summon Yo-Kai called Yo-kai Watch. You can add Yo-kai to your team by helping them carry out their missions, after which the Yo-kai will give you their own Yo-kai medal, allowing you to rejuvenate Yo-Kai in the future battles. Each Yo-kai has its own abilities, besides the Yo-kai are also divided into different systems and will overcome each other in battles. When winning battles, Yo-kai also has the ability to promote to help them become stronger, even able to evolve into powerful new forms.