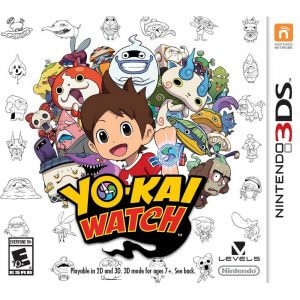 Yo-Kai is souls wandering around the world, they sometimes cause trouble for people but the majority are very gentle and friendly. That’s right, only the majority, so there are still people who use Yo-Kai to perform evil purposes that harm people. Join the game you will become control of Yo-Kai to keep the world peaceful. You will use a device to help monitor and control the Yo-Kai named Yo-kai Watch. While the top screen will display the characters and environment, the bottom screen will display the interface of Yo-kai Watch. You can make friends with other Yo-kai by feeding them and fighting them, if you win you will get Yo-kai Medal, allowing you to summon them to fight. On the other hand, some rare Yo-Kai that you need to complete some tasks to be able to own them. The Yo-kai are also divided into 8 tribes, each tribe will have its own ability, can be stronger than some tribes or weaker than others. Similar to Pokemon, Yo-kai can also level up and become stronger and evolve into a stronger new Yo-kai. In battles, you can use up to six Yo-kai that you already own, there will be many different action options from basic attack to special skills for each Yo-kai. There is a special event called “Oni Time” when you join you will be taken to another world, your mission is to try to collect lots of treasures and avoid unnecessary clashes.