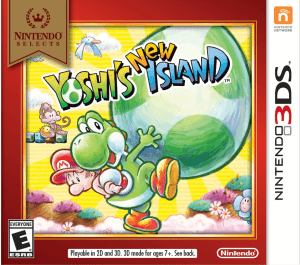 The story begins when a stork is on the way to take Baby Mario and Baby Luigi to their parents, but unfortunately, the stork has taken it to the wrong house. When they reclaim the two babies and bring them to their parents, the stork hits Kamek, causing Baby Mario to fall to Egg Island where the Yoshi clan lives, and Baby Luigi is captured by Kamek. But since Baby Mario could sense the location of her younger brother, the Yoshi clan decided to help find the Luigi Baby. Join the game you will control the piggyback Yoshi Mario and adventure through many lands. Yoshi has the ability to eat enemies and turn them into eggs, then you can use the eggs to throw at enemies or different objects to solve puzzles. Also when eating Giant will create Mega Eggdozers, a giant egg capable of hitting and breaking obstacles; Eating Metal Shy Guys will create a smaller egg capable of rolling on the terrain.