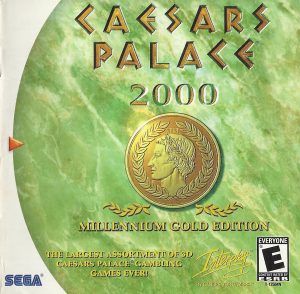 
Caesars Palace 2000 is a gambling simulation video game developed by Runecraft and published by Interplay Entertainment. It was released in North America and Europe in June 2000 for the PlayStation, Dreamcast and Microsoft Windows' PCs. It is named after the famous Caesars Palace luxury hotel and casino on the Las Vegas Strip in Las Vegas, Nevada. Interplay announced in late 1999 that they were working on a title for the Dreamcast which was known to be a 3D simulation of gambling with traditional casino games. The game was fully licensed by the Caesars Palace casino and features six card games, table games, five slot machine themes, and video game machines. Each game plays by official Caesars Palace rules and uses casino odds and payouts verified by a Ph.D in statistics. The PC version of the game received praise for its graphics and sound, but the Dreamcast version received criticism for its presentation, graphics, and slow pace.

Who Wants To Beat Up A Millionaire