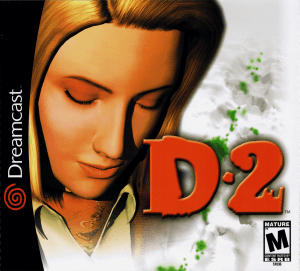 It is Christmas of the year 2000. In the skies over Canada, Laura's plane has been hijacked by terrorists. The plane is filled with screams, shouts and fear as the hijackers terrorize the passengers and crew. In one of the seats a black-robed magician gazes into a crystal, chanting the phrase "Shadow, the final destroyer". Laura's compact begins to glow. A vision of a meteorite hurtling towards the Earth is reflected in the mirror. Suddenly the plane is struck by the same meteorite that appeared in the vision, and falls towards the frozen tundra below. In the middle of a raging blizzard, Laura opens her eyes to find herself inside a mountain cabin. She was saved by Kimberly, one of the passengers of the wrecked plane. Ten days have passed since the crash but Laura can remember nothing, not even her name. The door of the cabin opens and one of the terrorists enters. While Kimberly and Laura stare in horror, he transforms into a hideous monster. He is not the only one. Other crash survivors and locals have mutated into terrifying monstrosities and attacked people. Is there anyway to survive this living nightmare? At present it is shrouded in mystery. D-2 is a follow-up to D, though the two games are not directly connected to each other story-wise and also have significant differences in gameplay. D-2 combines a horror theme with shooter and role-playing elements. Exploring the vast snowy landscape and investigating the surroundings triggers extensive cutscenes that advance the narrative. The 3D engine allows free navigation around the world, though in-door locations have first-person navigation with limited movement. It is also possible to pilot a snowmobile, hunt for food, and capture photos. Horrifying monsters will attack randomly (or serve as boss fights at specific points of the plot), at which point the player is taken to a separate combat screen. Laura must dispatch of the enemies by rapidly shooting at them, in a way not dissimilar to the shooting sequences of Snatcher. Enemies can attack from different sides, so the player often has to turn around and quickly react to their attacks. Laura's default gun is weak, but uses unlimited ammunition; stronger guns with limited ammo can be found by exploring the surroundings. Laura receives experience points for defeating enemies and eventually levels up, becoming stronger and having her hit points increased.