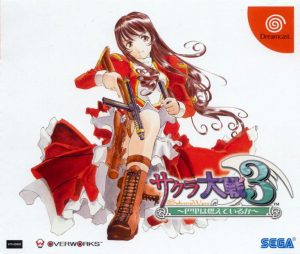 In the third installment of the Sakura Taisen series, Ichiro Ogami goes to Paris, to command the pretty girls of Paris Kagekidan (Flower Assault Squad), led by the lovely Erica. Just as in Japan, this special unit has a complex base which is disguised as a theater, since the girls of Paris Kagekidan can can act on stage as well as pilot huge steam-powered mechs. An unknown evil is threatening the city, so it's time for Ichiro to take command and save Paris from the demonic threat. Sakura Taisen 3 retains the basic gameplay style of the series, being a hybrid of dating-oriented role-playing (with timed responses during conversations with the girls, and the possibility to conquer the heart of one of them), and strategic turn-based battles. The game features fully 3D graphics for the battles and the map of Paris (although the locations in adventure mode are still 2D still images). The interface for the battles has been modified: you can move your mechs physically on the battle field instead of pointing and clicking, and an action points-based system replaces the "two different commands per turn" style of the first two games.