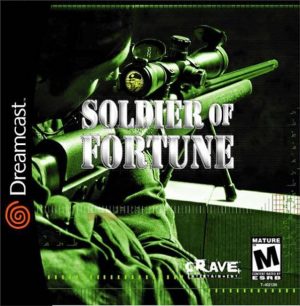 
Soldier of Fortune is a first person shooter game originally released for the Sega Dreamcast. A terrorist organization has stolen nuclear weapons from a facility in Russia, intending to sell them to various third-world nations, initiating a global conflict. The player takes the role of John Mullins, a US mercenary working for an organization known as "The Shop". The goal is simple: hunt the villains across the globe, thwart their evil plans, and save the world! Like most 3D shooters, Soldier of Fortune consists mainly of exploring the environments and killing the enemies that try to impede the player's progress. It is one of the first shooters to isolate over 20 different body regions and show/inflict damage to those regions. For example, if the player character shoots an enemy in the foot, the enemy will limp. The game was also notable for including realistic gore animations resulting from the injuries sustained by the enemies.