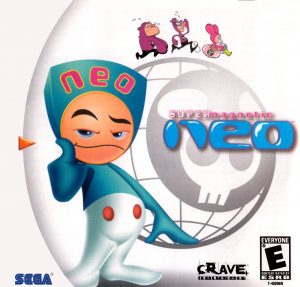 
In Super Magnetic Neo, a gang lead by evil, foul-mouthed baby Pinki has taken over Pao Pao Park. The professor must stop her, so her sends Super Magnetic Neo, a little boy robot with a powerful electromagnet on his head. The game has some resemblance to the Crash Bandicoot series in that some levels have you running toward the camera, have a side-view, or have you riding an animal. It contains some running, jumping and switch-flipping much like any 3D platformer. However, it does have a unique magnetism aspect. Positive and Negative charges are represented by red and blue. Neo's head can act as a positive or negative pole. This is called his magnogimmick. Using the principle of opposites charges attract and similar charges repel, Neo can pull himself toward platforms, then launch off them, or navigate many related environmental puzzles such as pulling himself into teleporters or swinging on magnetic pendulums. Enemies also come in red and blue and can pulled pulled in to be captured or pushed away to be avoided accordingly. You must use all these skills to make it through all four sections of Pao Pao Park and defeat Pinki. There is also a challenge mode, with a series of short stages to pass all based around proper use of the magnogimmick. It's something like the VR missions in the Metal Gear series.