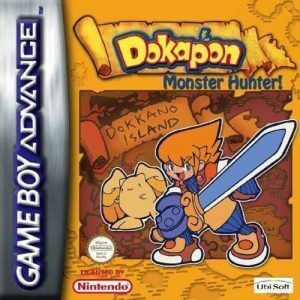 
DOKAPON – MONSTER HUNTER is set in the town of Poponga, located on the mysterious Dokapon island. Legend has it that thousands of years ago, there was a beast who lived here and gave birth to monsters with special abilities. After that, humans appear, subdue them, and organize championship tournaments. The main character is an 11-year-old boy, inspired by his father, who dreams of becoming a talented adventurer. He left the safety zone to start his exploration in Dokapon and search for the first warrior.

To become a great explorer, and recognized by 3A, you need to overcome difficulties and defeat all of the opponents along the way. The system provides a series of missions, including instructions to dangerous dungeons that need to be overcome. In general, its gameplay is quite similar to Pokemon, with a turn-based tactical element, and can catch monsters when they are weakened. Of course, they can also be used in character replacements. Dungeons are randomly generated and quite large. You can move back and forth between areas by using hidden paths or stairs. In particular, support items such as HP, MP recovery, and scattered items can be collected.

In a battle, the system provides a list of various skills. You can choose to attack, defend, or use items whenever it is your turn, but must aim for the ultimate goal of winning.
There are many factors that affect the result of a battle. First is the tactical ability, or more simply, it’s the method you choose your characters’ actions to perform. Second is the class and strength of the character. Obviously, when he reaches a high level and is fully equipped with armor, weapons, and shields, his statistic stats will be superior. Speed ​​is important. It exhibits flexibility and the capacity to dodge some slow attacks from enemies. Surely, it’s an advantage for you to turn the tables on a strong opponent. In terms of skills, it only consists of attack and defense techniques. Although initially, the default skills of warriors are available, characters can also learn from the monsters that defeated. However, weapons and shields can not be integrated too much, so you will have to give up the existing one to receive a new one.

Juka and the Monophonic Menace

Zone of the Enders: The Fist of Mars

Tom And Jerry – The Magic Ring