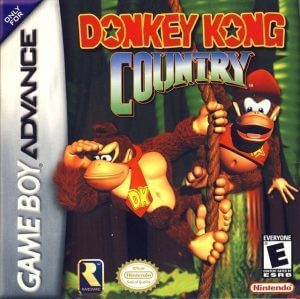 
Bananas have always been a nutritious source of food for Kongs. In the process of training for the young kids on the island, it provides a lot of energy. Bananas are long and scarce fruit when the weather gets colder, so, Kongs need to store a large number of bananas before entering the winter. On a stormy night, everyone stopped practicing and went home to rest. Donkey Kong assigned the task of guarding the stockpile to Diddy Kong as well as patrolling around the island to ensure the race members had a good night’s sleep. Unfortunately, the Kremlings brought his accomplices in, stole all of the bananas, and then locked Diddy Kong into a crate. The next morning, Donkey Kong returned and found out. He immediately set out to search for the Kremlings, based on the bananas he dropped on the run.

Donkey Kong Country organizes the game by levels. At each level, there are many stages that need to be overcome first before finding the final villain, Kremlings. In the beginning, the player will take the role of Donkey Kong and then control him to collect bananas. But after that, some crates may appear along the way. By breaking them, Diddy Kong might appear and accompany you in the difficult journey ahead. If one of the two Kongs is injured, he will temporarily disappear from the screen for rest, while the other Kong will take his place. If both Kong are injured and cannot move anymore, the player will be deducted one life point while one Kong will be revived. When the point of life is zero, the player must start a new game from the beginning. Occasionally, some mysterious buckets also contain DK Barrel. This item has the same effect as “1-Up” in the “Super Mario Advanced” Series, as an extra life point.

In general, Diddy Kong and Donkey Kong have the same basic skills: jumping, rolling, climbing, and swimming. These skills are often used to move through rugged terrain, or to jump on enemies to defeat them. However, that is only really useful when fighting weaker, smaller enemies such as fallen animals, bees or snakes. The reason is that their level of damage is quite weak, and not even really dangerous. Therefore, using any Kong is possible to overcome. However, for stronger enemies like Krushas and Klumps, it requires you to use special abilities to defeat them. Donkey Kong has strong fighting abilities when possessing the Hand Slap skill. This is a special move, he will move by punching the ground and attacking the enemy at the same time. Meanwhile, Diddy Kong is more agile so his defense will be better. Evidence for this, which the player can see is when they pick up the crate, Donkey Kong will lift the crate over his head, making his body easier to be attacked while Diddy Kong is wiser for placing the crate in front of his chest.

The journey to collect bananas of Diddy Kong and Donkey Kong will be much more interesting when the developer provides maps with many interesting topics. A jungle? High mountains, or tall trees and cliffs? It just more than that, when the topic of discovery is more expansive, with factories, mines, caves, and even the seabed. This will always bring new feelings to players, also is the point that makes the enemy become more diverse.

James Bond 007: Everything or Nothing