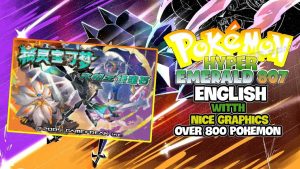 “Pokemon Hyper Emerald 807 English Patched (Pokemon Emerald Hack) ” is a remake of the original Pokemon Emerald version of an author group including Satochu, Poppy, and wwwww.

– Most animal sites reset
– Skills to the latest generation changes, including plasma lightning boxing (no animation)
– Add more skill animation, to the sixth generation, the seventh generation of skill animation has not made up
– Walking map to expand the boundaries of breakthroughs, the new animal walking map, the animal is no longer a stone!
– Add two weeks – research alliance, adjust the champion of the past two weeks, the purpose of the Union
– Added Silver Mountain – Challenge Red! Through the parallel space-time in a very researching hole, you can reach the legendary “…” trainer in Baiyinshan – Redness! The purpose of the two-pass clearance will be refreshed once Red!
– GMM Added Battle With Red!
– Partially broken BGM repair
– Walking map repair, no longer flash screen
– New time frame (optimization)
– Start interface adds a similar dark logo backpack pattern
– The new blob frame beautification
– Walking map reflection repair
There are a variety of unfinished things, but at least 807 capture, so the first release, the rest will continue to update, it is estimated that the Lantern Festival will release a new version
– Mega Evolution
– Z-Move looks like A Normal Move with more power!