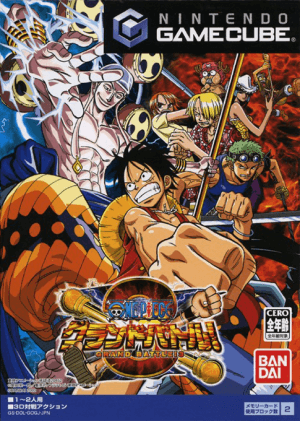 One Piece: Grand Battle! 3 is a fighting game based on the One Piece manga and anime, released on the Sony Playstation 2 and Nintendo Gamecube. The direct sequel to Grand Battle! 2, it is notably the Grand Battle series' first fully three-dimensional game, and primarily adapts the events of the Sky Island Saga. Developed by Ganbarion and published by Bandai, it was released in Japan on December 11, 2003. Overhauling its 2.5D predecessors into "true" 3D, Grand Battle! 3 features all-new character models and more elaborate mechanics (often likened to Capcom's Power Stone). Player characters can not only run, jump, double-jump, block, and grab (as well as throw and catch) items around three-dimensional environments, but access a number of new attacks with unique effects. Despite its smaller roster, Grand Battle! 3 boasts an even larger cast than its predecessor, as it casts most of its background spectators in addition to the player and support characters. While it generally remains faithful to the TV anime's castings, a few minor characters (such as Higuma) are completely recast.