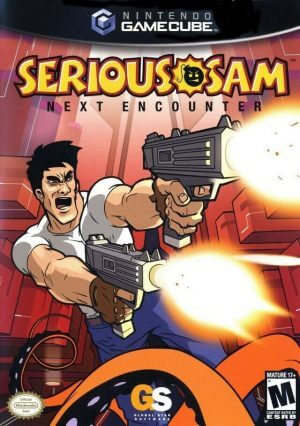 In this installment of the Serious Sam series, Sam takes on a new arch-nemesis "Mini Sam", an evil clone of the hero Sam "Serious" Stone. Mini Sam has taken control of the timelock and is going through time wiping out ancient civilizations – and it is up to Serious Sam to put a stop to him. The game takes the player through over 40 levels in three historic locations; Ancient Rome, Feudal China and Legendary Atlantis. The PS2 version includes online multiplayer support for up to 8 players via the broadband adapter and two players on one PS2, while the GC version allows 4 players to battle it out on one GameCube. Competitive multiplayer modes include Deathmatch, Hold the Flag and Pass the Bomb. The entire single player campaign can be played through co-operatively, allowing two players to help each other take on the vicious armies of Mental and Mini-Sam.