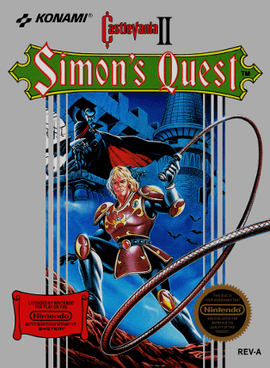 Castlevania II: Simon’s Quest is an action-adventure game released by Konami. Continue the journey of Simon Belmontsau after coming to Castlevania and defeat Count Dracula. With this version, players will control vampire hunter Simon Belmont on the journey to eliminate the curse of Dracula. To find the clues, the player will control Simon talking to the villagers. In addition, Simon will fight enemies to move into inaccessible areas. He can also find merchants who supply items to collect more clues. While destroying the enemy, Simon will receive hearts. These hearts will help him pay the people who have provided the information. Simon’s only weapon in fights is the whip. To upgrade his weapons, he can buy additional whips at the store at certain locations in the game. Collecting more hearts will help Simon increase his level. Every time he leveled up, Simon’s health limit was raised.

During his adventure, Simon will have to attack his enemies both day and night. Players will easily attack enemies outside the village during the day because their strength is reduced. But at night, players will be more difficult to destroy them because their strength is increased. After defeating enemies at night, Simon will collect more hearts, and his level will easily rise higher.

After collecting all the clues, the player will go to five castles to search for the body parts of Dracula’s corpse and obtain the item of Magic Cross. Everybody part found in the castle will have a great effect on assisting Simon in the game. Those parts are Dracula’s Rib, Dracula’s Heart, Dracula’s Eye, Dracula’s Nail, and Dracula’s Ring. Dracula’s Rib will create a shield to protect Simon from attack from enemies. Dracula’s Heart will help Simon cross the rugged terrain and take him to the secret location. By activating Dracula’s Eye, players will be able to visualize the location of buried items, such as various clues books scattered across the ground. When using Dracula’s Nail, the nail gives Simon strength and allows him to break through obstacles with a simple whip. Dracula’s Ring is a very important item. Entrance to the bridge leading to Castlevania is only granted to people wearing this ring. Without it, any attempt to reach Simon’s castle is futile. Players will complete their mission when Dracula is completely destroyed.