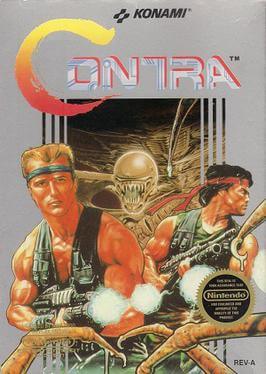 Contra is a very famous role-playing game released by Konami. The game takes place in the year 2633 AD, where the island of Galuga was ruled by the Red Hawk Organization with the plot to wipe out humanity. In this dangerous situation, the Earth Marine Corp team tasked with destroying the enemy and exploring alien forces controlling Red Hawk for two soldiers, Bill Rizer and Lance Bean. With two excellent soldiers of the Contra unit of Earth Marine Corp, the game supports up to 2 players at once, one is Bill, and one is Lance. Two players need to combine with each other when moving and destroy the target to overcome the obstacles quickly. Players use control buttons to move, attack enemies, and destroy the Red Hawk base defense machines. Players can roll when jumping, swimming, and lying down to destroy the immediate targets. In addition to controlling the character’s direction of movement, you can also control the trajectory, including lying or moving underwater. In addition, players can shoot targets in any direction such as top, bottom, left, right, and diagonal lines. Laying down can help players avoid attacks from enemies.

The game provides players with rifles with automatic firing mode, and the number of bullets is unlimited. In addition to the original gun provided, players can also replace their guns by firing on high targets, cannons, or defeating the red-shirt guards. The types of guns that players can encounter will contain attack power and extremely large range such as machine guns, laser guns, flamethrowers. However, if you own a modern gun that accidentally hits an enemy bullet, that gun will disappear, the player will reuse the default gun to continue the match. Using a gun with a great firing range combined with flexible movement will help them quickly overcome obstacles.

Players need to go through 7 stages to be able to complete the mission. At the end of each stage, the redshirt guards are the biggest hurdles for Bill Rizer and Lance Bean. Let’s quickly destroy the base and move on to the next stage of the game. After a certain period of time, players will encounter great machines with high destructive power. Use your dexterity to evade attacks from them and counterattack to break those machines. After going through the above stages, players come to the final stage full of difficulties. A giant head will appear on the screen, and the larvae will turn out of its mouth in turn. Players need to destroy all the larvae and, at the same time, attack the giant head to complete the mission.