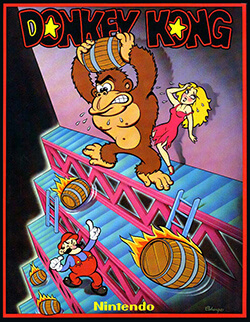 Donkey Kong is an action game released by Nintendo in 1981. Players will control Mario through a series of challenges while dodging and jumping over obstacles and probing information from enemies to rescue. A character named Pauline. He was imprisoned by a giant ape named Donkey Kong.

In order to rescue Pauline, Mario needs to overcome many of the obstacles that appear on the road. In addition to jumping over obstacles, he can also use his power hammer to destroy them. When performing those actions, he will gain a certain number of points. Mario will increase the number of points he has by collecting items that appear on the road like hats, wallets and umbrellas. Removing the nails on the floor and passing each stage will also give him some points. The game will give players 3 lives and 7000 bonus points. When Mario touches Donkey Kong or any obstacle, he loses a life and loses a lot of points.

The game is divided into four different stages. At each early-stage, Mario must cross 25 meters including obstacles and obstacles. In the final stage, the distance he needs to move will be 100 meters. In the first phase, Mario will have to pass a construction site with barrels and oil tanks thrown by Donkey Kong. He will climb a conveyor with 5 floors of cement pans in phase 2. In the third stage, Mario will move in an elevator and must avoid collisions with moving springs. In the final stage, he will remove eight nails from the donkey Kong support. When the last nail is destroyed, Donkey Kong will be defeated.

Players will complete each level when passing 4 stages. After completing the last stage, the level will increase and the game will be repeated by the old stages but with increasing difficulty. At each subsequent level, Donkey Kong will attack Mario by throwing barrels of oil faster from random directions. In addition to weapons as oil tanks, it also possessed fireballs. Players need flexible control to avoid attacks from Donkey Kong. Some things will change when the player reaches level 4 and level 22. Level 4 will include 5 stages and the distance to move in the final stage is 125 meters. The game will end when the player reaches level 22. At this level, Mario will be destroyed due to a small error in the game.