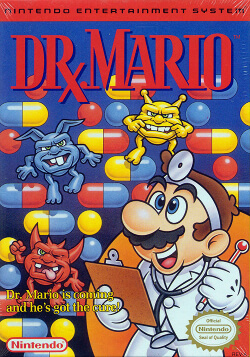 Dr Mario is a fascinating puzzle game produced by Gunpei Yokoi and published by Nintendo. The game revolves around the character Mario, who takes on the role of a doctor, is tasked with eradicating viruses that harm human health. Players need to destroy the virus located in a box on the screen using the drop medicine. After removing all viruses, the player will be moved to the next level.

Each box will contain viruses in blue, red and yellow. Players will control Mario to drop the medicines into the box so that they are linked to the appropriate coloured viruses. They control each medicine as it falls, move left or right and rotate it so that it combines with the virus. When all sides of the medicine or half of medicine of the same colour match the virus’s colour arranged in a vertical or horizontal configuration, they are destroyed. A level will end when the medicines fill the void of the box on the screen.

When starting the game, players will choose the difficulty level. They can choose from 0 to level 20. Each level will specify the number of viruses to remove and the speed of the medicines falling in the bottle. Players will accumulate a certain number of points each time they destroy a virus. This point does not depend on the removal time and the number of medicines used, but only on the number of viruses removed. The number of viruses to eliminate in one level is constant, which allows players to play again and again of the same type. When players complete the highest level, they can continue playing to accumulate higher points. When Mario destroys multiple viruses at once, he will gain additional points. However, consecutive anti-virus combos will not bring additional points. In the game, the number of points collected by the player is different. If you play the high level, meaning that the drop speed of each medicine increases, the player will get more points.

In addition to the single-player mode, the game has a multiplayer mode. There, 2 players compete against each other in different boxes. To win in this mode, players need to kill all the viruses in the fastest time. Participating at a higher level helps players to reflect faster when dropping the medicine. This experience will give them victory when performing a chain of chain reactions to kill viruses fastest.