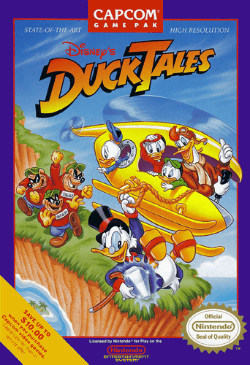 Scrooge McDuck is a wealthy boss who loves rare treasures. Coming to DuckTales, you will be on the journey to find 5 special treasures of Scrooge McDuck. In addition, these 5 treasures will be hidden in 5 different lands. To be able to collect all 5 treasures, you must overcome many obstacles and defeat the bosses at the end of each land.

The challenge of the game will be arranged in 3 different modes including simple, normal and difficult. The five lands that you need to conquer are the Amazon forest, the Himalayas, the moon, gem mines and Transylvania. In particular, Transylvania and gem mines are two places that you need to be interested in because they possess two special items to collect. In addition, you can freely choose 1 of the 5 locations to conquer without exploring in a fixed sequence.

In the game, you will have to control Scrooge McDuck skillfully to overcome many pitfalls in the five lands above. Each region is designed according to a different map system and combat environment. From there, your enemies are also more diverse. To defeat the enemy, Scrooge McDuck can swing or jump into the air and use it as a pogo stick. Besides using a stick to destroy enemies, you can also use it to destroy objects on the way (rocks, wooden crates) to collect diamonds and ice cream. Collecting diamonds will help you gain new points. And ice cream is responsible for helping restore health to Scrooge McDuck.

Along with defeating the enemy and overcome complex traps. You also meet many different characters in the game. Each character will have a unique function. They can provide helpful information for you to collect treasures faster, sell your support items or help you enter new areas to accumulate bonus points and collect valuable rewards.

After collecting all five valuable treasures, you will have to return to Transylvania to fight special bosses. The first boss you need to defeat is Duck Dracula. After that, you continue to fight with two other tycoons, Magica De Spell and Flintheart Glomgold. Defeat all bosses and collect valuable treasures, you will gain a certain score. From the accumulated score, the game will evaluate your play according to the corresponding reward. With a high score, you will receive 10 million dollars. Achieve low score, you will not receive a bonus.