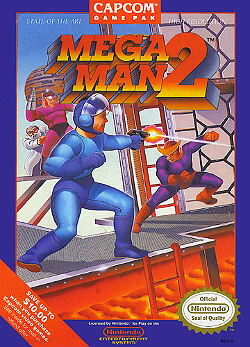 Mega Man 2 is an action role-playing game that has the same gameplay as the previous version. Continuing Mega Man’s journey to defeat Dr Wily and Robot Master to bring peace to the world. The task of the player is to overcome 8 floors to destroy the robots blocking the road and obstacles before facing the final mission: fighting with Dr Wily’s fortress. Players will control Megaman to win battles with Master Robots that appear on each floor such as Metalman, Air Man, Bubbleman, Quick Man, Crash Man, Flashman, Heat Man and Woodman. The Robot Master does not possess any energy bars and can be destroyed by sixteen normal attacks or three attacks on their weaknesses. When defeating each Robotmaster, the player will receive the unique weapon of Robot Master. Using weapons collected on the previous floor will make it easier to play against Robot Master on the next floors. After passing certain levels, Megaman will receive a special item. This item will help Mega Man move into special areas to complete the task easily.

In the final battle, Dr Wily fled into the caves beneath his fortress under the protection of Robot Master. The fortress will appear when the player defeats the 8 Master Robot in turn. In the fortress, players will face the attack of the second Robot Master. However, the Robot Master appears in the same room rather than appearing in different rooms as before. Each Robot Master will appear via the teleporter. Use weapons and energy boxes collected from the previous floor to attack Robotmaster as quickly as possible. After defeating all Robot Master, players will control Megaman to fight Dr Wily. Using the experience of fighting with previous Robot Masters will be an important factor for the player to win.

The game has some changes in gameplay compared to the original version. Players will experience the fight with 8 Robot Master, different from 6 Robot Master as the old version. In addition to possessing weapons inherited from the Robot Master, players also receive energy boxes. This energy box allows them to recover HP at any time. The player cannot return to previous levels after completing them. The Robot Master is beautifully designed with greater strength will help players feel excited when fighting them.