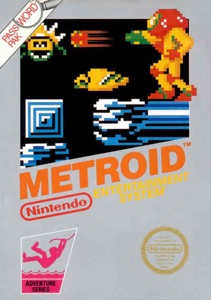 On planet SR388, Space pirates attacked a Galaxy Federation research vessel and captured the Metroid creature. Metroid is a dangerous creature for all other species on this planet, it can parasitize any individual and destroy the subject by sucking up their energy. Intending to use them as biological weapons to destroy all creatures, this group of space pirates planned to create Metroid by exposing them to beta rays to stimulate their fertility. Facing that threat, the Galactic Federation sent Samus Aran – a bounty hunter – to infiltrate the pirate group’s base and destroy biological weapons.

Metroid is an adventure action game released by Nintendo based on the storyline available with one player mode. Players will control Samus Aran in a cave with different terrains to destroy dangerous creatures and hunt down Space Pirates. Special areas in the game are connected by doors and elevators. Initially, Samus will use the beam of power from his hand to attack strange creatures. Players need to move and jump to dodge and defeat those creatures. When Samus jumps, she curls up into an acrobatic jump instead of performing a normal jump like other games. The joystick not only controls the player’s movement while moving and jumping but can also attack targets in front of him. Control your character to shoot left, right or upwards while standing to destroy the entire target. Crossing multiple areas and eliminating creatures will help Samus gather special abilities, upgrade armour and weapons to help players reach new areas. In addition, some special skills and items that players can collect on a journey like Morph Ball: allow Samus to curl into a ball to roll into the tunnel. Bomb: can only be used when in shadow form and can open hidden paths. Finally, Screw Attack: wide-area damage skill that destroys enemies in its path.

Players will collect energy or ammunition when destroying ordinary creatures. In order to collect more energy and ammunition, players can increase their carrying capacity by finding tanks. On the journey to the final boss, Samus also faced two opponents with extremely strong power is Kear and Ridley. After both Kear and Ridley are defeated, the player will be taken to the final area to battle Brain Brain via a tunnel.