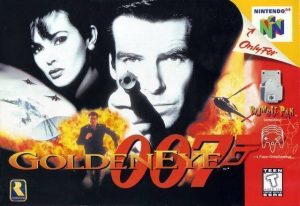 GoldenEye 007 is a classic FPS game from Rare for the console device Nintendo 64. It was created based on the GoldenEye movie whose protagonist is James Bond, also known as agent 007. Therefore, the plot that the game is directing is quite similar to the story in the movie. There are even scenes rebuilt to bring the most authentic feeling to those who love this guy.

The game is designed and placed in a three-dimensional space. Through the first perspective, the player will feel like he or she is transforming into the James Bond character in the action scenes. The manufacturer has paid special concern to the effects of the game. Players will have to reload as the shooting scenes you saw on the film, every shot there will be flashes, and shell casings splash out; or rays of light of bullets passing through a character, bullet holes on the wall, all have been brought to full. And they are all evidence to show that they have refined every single detail.

GoldenEye is the name of a satellite weapon of destructive nature. In this story, similar to the movie, James Bond will have to take action to destroy this satellite before a criminal organization uses it to attack the city of London. However, this was not easy as he had to infiltrate the enemy base alone. Although the enemies may not be smart, it is important that they are numerous. So the game of Golden 007 relatively revolves around stealth. When participating in the game, you will transform into agent 007 then use the guns to take down the enemies. You will probably need a bit of hiding and sneaking when having to face such a large number of enemies. Get ready and reload before opening each door or moving through a new area. In addition to the default weapon, a pistol, players can also use other weapons of their choice as machine guns, grenades, or melee weapons are knives.

Besides the single-player mode against AI as above, the game can also support multi-player mode with the number of participants up to four. In this case, 4P will join the grim deathmatches altogether, through a split-screen corresponding to each player.