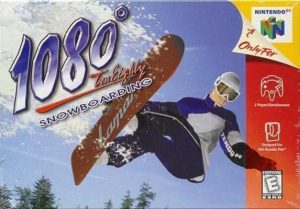 Exciting snowboarding matches, chases under the cloudy snow, will be reproduced in this game. If you are an extreme sports enthusiast or a speed lover, then do not hesitate to download 1080 ° Snowboarding now to experience the matches in the most realistic way in the 3D graphics. Nintendo EAD is once again the creator of this cult name. The game was published by Nintendo for the Nintendo 64 platform.

The game does not have a certain plot but mostly focused on organizing the matches. The gameplay of the game is quite simple but requires the skills and flexibility of the player.

When participating in the game, you will have to transform into one of the characters and help him/her to control a skateboard. There are five characters all with different nationalities: two from Japan, while the other three are from Canada, the United States, and the United Kingdom. In addition, after you complete certain stages, the number of characters will be increased to eight with the appearance of The Ice Man, Gold Boarder, and The Panda. Besides, the number of skis also has a lot of models with a total of up to 9. However, the last special board, Penguin Board, will only be unlocked after the player completes enough a number of levels and some modes. Regardless of characters or skateboards, each of them has each strength and weakness that you can only discover through experience.

There are six modes, with two trick modes, three race modes, and one training mode. In trick modes, the goal that the player must complete is to create trick combinations so that they are beautiful, right techniques, and of course must succeed. While race modes are the modes that players most expect. Through this style of play, players can show off to become the world’s number one player. Tricks will count here, however, the latter is still to reach the finish line as soon as possible. So, consider creating tricks. If you are not strong enough to control the character or win perfectly, then enter the training mode to perform the training. In addition, there is an options mode. Here, you can review the recorded screen.