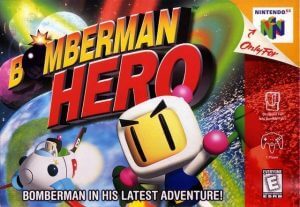 Bomberman games seem to be too well known in the gaming market. In it, Bomberman Hero is a game designed for the Nintendo 64 platform, just behind the old Bomberman 64 AI Inc is the developer who made this version. The game is published by Hudson Soft, belonging to the platform line.

As you know, Bomberman’s daily job is to maintain the peace of the universe. Still a peaceful day like any other day, Bomberman was tasked with handling an event at the Peace Mountains, but more specifically about a spaceship collision. At the scene, a strange robot appeared. He tells Bomberman that the Garaden Empire has invaded the Primus Star. Princess Millian has secretly stolen a particularly important data of them and put them on the robot. A perfect escape plan has taken place. However, unfortunately, during the escape, she was arrested again. As for the robot and the database, it was fortunate enough to escape and was slammed into the Peace Mountains like it is today. As a guardian of the universe, Bomberman decided to head to the Primus Star to rescue Princess Millian and the land.

Bomberman Hero’s gameplay has been slightly improved as the number of levels, weapons, monsters, and even the character’s techniques have been increased, compared to its predecessor. However, one player mode is noted for more investment. Therefore, the game does not integrate a multiplayer mode.

The main game mode of the game consists of five planets. Each planet has about three different areas to explore, with about five smaller parts each. Besides, there is a hidden world called Gossick Star and a bonus world is Bomber Star. Throughout the game will be the display of bombs to destroy the monsters. Characters can use moves such as jumping, bombing, bombing, bombing, and climbing onto ledges. A mount is also possible to ride in the game. In addition to the purpose of travel, it can be considered as a second life.

In addition to the above game mode, the game incorporates three more mini-games: Slide Racer (participate in races with snow-man opponents), Golden Bomber (defeat Boss of the Woods after completing into three stages), and Treasure Hunt (in search of Bagular’s treasures from the ship of Princess Millian. After being shot down, this series of treasures has scattered throughout six different planets).